Warning: This post is not to be read on an empty stomach. Also, this post is heavily laden with images. It’ll take some patience, but it’s worth the wait.

A trip wouldn’t be complete if I didn’t sample as much of the local fair as I can. This trip was no exception. I was feeling particularly deprived since Virginia Beach doesn’t have quite the selection of eateries that Los Angeles does.  Our main focus was ethnic cuisine and CUPCAKES! Good Gawd! I’m thankful we did a lot of walking. Otherwise, I would have returned 15lbs. heavier. Here’s a pictorial of some, but not all of our epicurean exploits.

Review: With cupcake afficionados, there is a bit of debate over who has the better cupcake – Sprinkles cupcakes (L.A.) or Magnolia Bakery (NYC). As someone who has sampled both, I can honestly say it boils down to personal preference. Both make superb cupcakes. With Magnolia, I enjoyed the moistness of the cake as well as the airiness of their frosting. Because of the nature of their frosting, I did find the cupcakes best consumed immediately lest the frosting turn into a gooey mess. Oddly enough with Magnolia, my favorite dessert is not their cupcakes. I am HUGE fan of their banana pudding. {I blame my cousin Rhed}. I won’t recount how many cups of Banana Pudding I consumed except to say the amount bordered on the obscene. 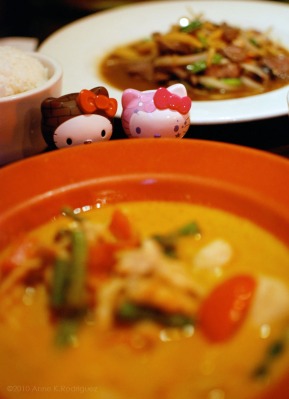 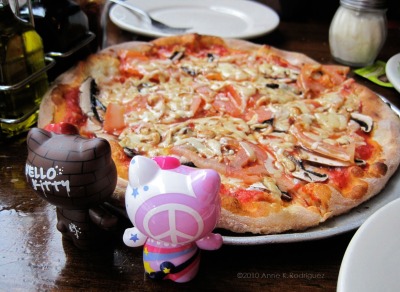 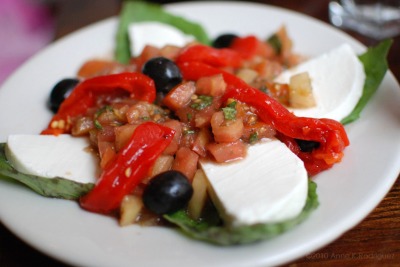 Review: While extraordinarily gorgeous, the cupcakes were dry and dense. The flavor was akin to cupcakes made from Betty Crocker box. We were very disappointed. 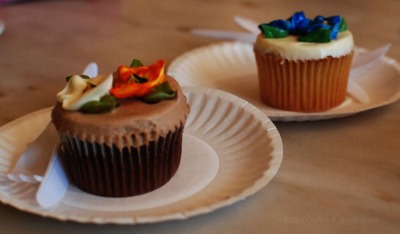 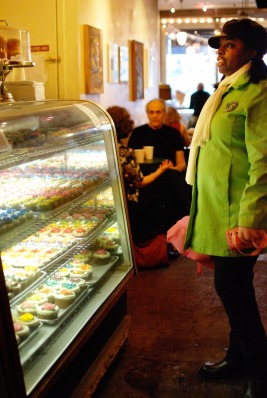 Babycakes NYC
248 Broome Street
New York City, NY 10002
Review: A visit to this cupcakery turned out to be a tad controversial and a bone of contention. Babycakes is a Vegan and Gluten-free bakery. The former Cali girl in me really wanted to try their confections. Babycakes bakes with all-natural, organic and delicious alternatives free from the common allergens: wheat, gluten, dairy, casein and eggs. The majority of their cupcakes are sweetened agave nectar. As someone who has had many Vegan desserts, I wanted to see how Babycakes stacked up. The problem came because I did not warn my dining companions Cicely and my cousin Rhed that it was a Vegan bakery. As a Southerner, Cicely was particularly disappointed. I captured the look on her face as she tasted the cupcakes, but I shan’t post the photo lest she kill me and never speak to me again.

The verdict? They cupcakes are pretty good considering how they are made. Do they compare to regular cupcakes? Absolutely not. As compared to other Vegan desserts, they are quite tasty.

The Hello Kittys with Babycakes Cupcakes 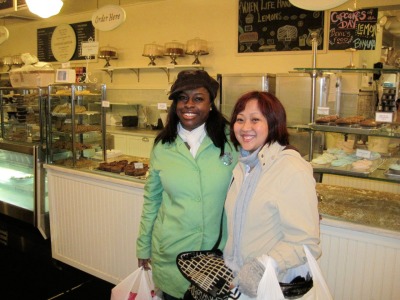 Note: Our trip to Babycakes angered the Sugar Gods according to Cicely. The wrath of the Sugar Gods entailed several delayed trains and getting completely drench in the torrential downpour. To appease the Sugar Gods, we needed to make a stop at a cupcakery that served “REAL” cupcakes. There is some credence to her claim. Once we got cupcakes, our night improved, as did Cicely’s mood. 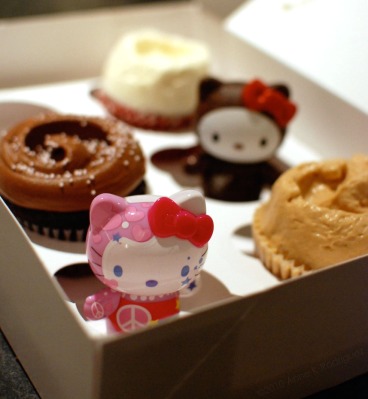 The Hello Kittys with Magnolia Cupcakes

Little Cupcake Bakeshop
9102 3rd Avenue
Brooklyn, NY 11209
Review: We scheduled a tweetup at this bakery. Because Cicely and I were not familiar with Brooklyn, we did not realize that this bakery was inconveniently located. With the inclement weather and several train delays, we arrived shamefully late to our own tweetup. I would like to say that the cupcakes made up for the delay, but I can’t. I found that the cupcakes were inconsistent. Either the cake was dry and seemed old or the frosting was gritty and too sweet. The company with whom we had the cupcakes with more than made up for the trek. 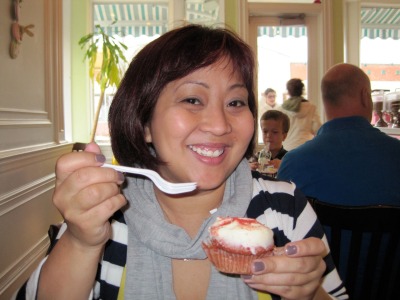 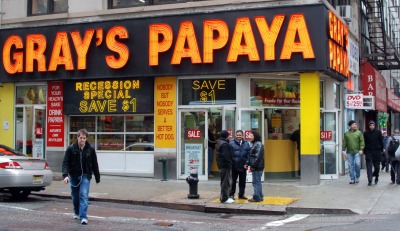 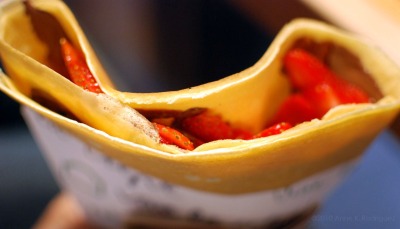 I am rediscovering my hometown. I am thankful for the opportunity to take a moment and plan what comes next. But as I’ve said like a broken record, I am a city girl.  I love it and miss it desperately. The burning question is which city shall I inhabit next?  When I moved to Los Angeles, it was  a blind and impetuous move. It had its ups, but mostly downs. This time around I intend to do more thorough research. Aside from my  general love of cities, I have other criteria. I am in search of a city that is economically feasible, creative job market (read: I can get a job in design or advertising), cultured with a strong art and craft scene, ethnic diversity, and restaurant scene. A tall order I know, but in a way Los Angeles has spoiled me. There isn’t a set timetable for my next move. In my ideal universe, it will be early next year, but we’ll see.

Not even two weeks after my cross-country road trip, I was invited by Cicely to meet her in the Big Apple.  NYC had never been a consideration for me as a place to live. That is, until I met Cicely. I’ve known her for almost 10 years. In that time, she has talked incessantly about NYC and how she’d ultimately like to live there.  I had my misconceptions about the city and always thought that I could never hack it here.  So, I moved to Los Angeles instead. We all know how fabulously L.A. turned out. Courtesy of Cicely’s and few of my other friends’ (Pamela, Amber, Karla, and Anthonine) strong suggestions, NYC made the list of cities to visit and consider as my next home.

So, I took a Chinatown bus to NYC. For those that aren’t familiar, Chinatown buses travel between major cities at a minimal cost. In this case, my roundtrip ticket between Virginia Beach to New York City was $60. The stops are either in Chinatown or a in front of an Asian grocery. A tad odd, but workable. The bus left Virginia Beach at 1AM. We arrived in NYC at 6:45AM. When you do the math on that travel time, it’s disconcerting. I’m glad I was asleep.

"The View" from our Studio Apartment

I arrived before Cicely and checked into the studio apartment in Hell’s Kitchen that we were renting for the weekend. The apartment was spartan, but comfortable and well-situated near the Port Authority Bus Terminal and Times Square. I took a short nap and met the lovely Amy of ABCD Design for a late lunch in The Village. (Amy, do you recall the name of the place?) After lunch, I got a tour of the Village. Amy had me so enthralled with her stories of living in this part of NYC that I completely neglected to take any photos of the area. {Bad photographer:( } I did get to peek into some antique shops. After my outing with Amy, I wandered around the Village and parts of SoHo on my own. I was in design nerd heaven. I popped into several few furniture and design stores. I went into sensory overload at Paper Presentation. I am very proud that I didn’t buy a single thing. Then again, my strict budget had a lot to do with it.

Once Cicely arrived, the tomfoolery and adventures began in earnest. If you know anything about us, you know that things are never dull when the two of us are in cahoots.

Cicely and I, however, selected an inopportune time to visit. We happened to be in NYC during RECORD rainfall. Not just rain, sideways and windy rain. Of the 5 days I was there, it rained 4 days. 😦 The weather reports had predicted rain and I had arrived prepared with a raincoat and polka-dotted rain boots. We still spent a good part of the trip drenched. In spite of the deluge, we had a good time. The rain would not stop our fun. We traipsed all over town. We had delectable meals. Shopped. Ate cupcakes. Saw the Statue of Liberty. Ate some more. Shopped some more.  Had lots of cupcakes.  A torrential downpour was not going to stop us. 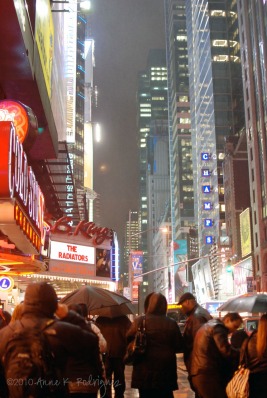 For part of the time, my cousin Rhed played tour guide. Having Rhed join us was a welcome relief. As much as I love my iPhone, it was cumbersome trying to read subway maps on my iPhone in the rain. As someone who lives in the city, Rhed was able to direct us to the most efficient subway routes and exits. The knowing the right subway exits is key. I can’t tell you how many times Cicely and I would arrive at the right stop, exit on the wrong side of the station and have to walk several extra blocks. There were moments when both of our patience was being tested.

Cicely and I even squeezed in a Tweetup (meeting with folks from Twitter). Serious subway delays caused us to be shamefully late. We didn’t get to see as many people as we would have liked. {Am really sorry to those that we missed}.

I didn’t think it was possible, but Cicely and I had more fun in New York than we did during our cross-country road trip. I was so sad when Cicely returned home on Monday. I stayed an extra day and half. Rhed and his roommate Dave generously let me stay at their apartment for that extra night. With that extra day, Rhed and I geeked out. We are gadget aficionados. As such, he indulged my requests to go to B&H Photo, first Apple Store in NYC, Lomography store, Muji, MOMA Design stores, etc., etc.  We did A LOT of shopping and walking around, which is good because we snacked a lot, too.

What’s the verdict? I am absolutely smitten with NYC. I felt like I belonged. The city simultaneously excites and scares the beejezus out of me. NYC is urban and gritty. L.A. was residential and glitzy. Of course, I am skeptical. Am I smitten because I was on vacation? When the vacation buzz wears off, can I live in this city? Besides, who falls in love with the first place they visit? Who does that?! So, I am going to check out other cities and visit NYC a few more times before I make any final decisions, but I gotta tell you NYC has set the bar REALLY high.

The writing and photos by Anne Kabaitan are licensed under a Creative Commons Attribution-Noncommercial-No Derivative Works 3.0 United States License.

What I gab about…